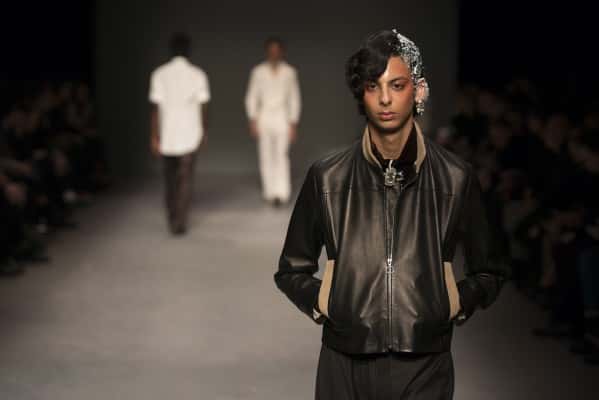 MAN over its 10 years has given us some of the best in menswear talent such as Craig Green, Christopher Shannon and JW Anderson. Now for Autumn Winter 2016 the newest trio of designers gave us gender fluidity, Club Kids and West meets African history.

Fresh out of Central Saint Martins, Grace Wales Bonner, fused ancient Africa with 1970s European influences for her debut MAN collection. Using rich earth tones of mud browns, intense terracotta and sand became the backbone to the 17-piece collective inspired by the cultural and sexual identity of the black male.

Zigzag tank tops with oversized white shirts and a matching scarf added a sense of Northern Soul to the proceedings.

Tracksuits with matching brown leather shoes, double-breasted tailoring in charcoal and a patent leather bomber jacket all had relaxed Oxford Bag trousers. Rounding off her first LC:M experience an all white number with butterfly lapels and animal print shoes.

Chest-binding panels over a navy silk blouse, velvet hoodies masking the models face and ‘Nancy Boy’ printed clothing, paired with baggy black trousers and Converse trainers are the newest addition to gender-fluid clothing; carrying on from where 2015 started. 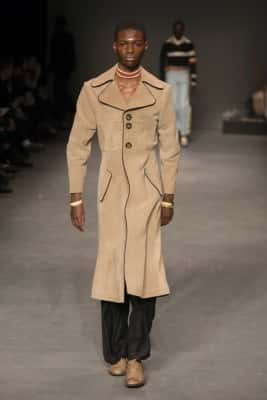 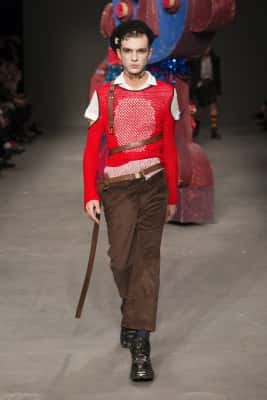 Oversized coats gathered in at the waist with a roll-necked jumper covered the almost androgynous model’s hands. A round-necked bomber jacket with white noise graphic print and a slit neck top created a cowl fascia for the fluid fashions.

Overall, Parnell-Mooney’s collection had angst and an almost fetishistic quality to it from the leather gloves, dog collar like neck adornments and big leather belts.

However, as one side to gender fluidity left, another entered as Charles Jeffrey’s Club Kid inspired creations added colour to the once dark runway.

Mixing oversized tailoring with cropped shirts and tube socks, a tartan jacket cut off at the waist with ankle kissing paint-splattered jeans with New Rock boots. Gave way to exaggerated suits in blood red and ice blue, contrasted against the figure hugging knitwear reminiscent of the tail end of 70s Punk with its Bondage-style harnesses and cut-out segments.

Jeffery’s collection played homage to the cool kids of yesteryear with pale complexions and a bold statement lip, gold hair at the front and deep purple at the back, and platted dreads with pink flashes a’la Boy George dominated the Topman show space.

Relaxed fitting trousers as seen by Jeffery’s predecessors had paper bag waistlines thanks to skinny belts, or should I say elasticated carrack ties! However, in juxtaposition, a flowing lavender silk gown, with a vivid purple overcoat strewn of the gender-fluid model’s shoulder paid homage to the more feminine side of the Club Kid collection.

The finale by Jeffery’s is centred on a subculture of the 1980s, only it couldn’t be any more current if it tried.