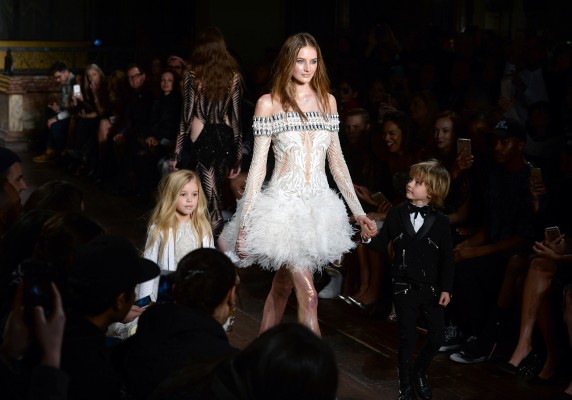 Metallics, embellishments and lots of crochet. This year’s collection featured hues of black, gunmetal greys, golds and silvers. The catwalk was rather gothic with the golden church-like backdrop. It set the scene for this fall’s dark yet glamorous collection.

A stunning black suede two piece featured a halterneck style panel on the top alone with crochet inserts down the centre and on the sleeves. The midi skirt which cut just above the waist exposed the hips ever so slightly with triangular crochet cuts on the sides.

The co-ordinates managed to ooze just the right amount of sexiness without going over the top. This outfit is the more feminine version of the near-similar black crochet jumpsuit Kim Kardashian wore from the Welsh designer from his Fall 2015 line at the BRIT Awards 2015. 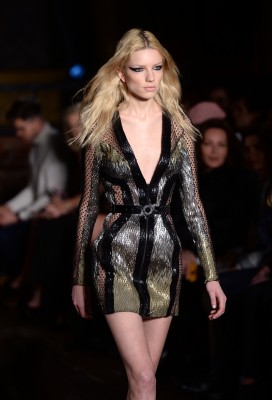 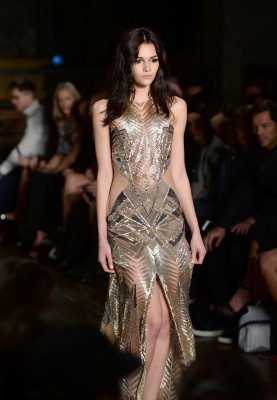 Corresponding with other crochet-laden outfits, a few embellished pieces made appearances down the runway such as this smokey grey number. The metallic triangular and diamond cuts down the centre of the dress and across the chest gave the illusion of the dress being made up entirely of embellishments. The dress was structured beautifully and was cinched in at the waist to add shape. The bottom half featured a modest cut that finished at the middle of the thighs. This number looked as though it could’ve been the love child of grunge and glamour.

Metallics also made it’s scene with this slinky plunging gown which featured a silver to gold gradient effect. The plunge cut off just below the waist. The overall metallic look teamed with the color transition made this dress eye-catching. This gown was another one of MacDonald’s designs that oozed glamour and sex appeal without going overboard. The cut outs at the waist and the deep plunge spoke for itself.

The show came to a surprising close when Julien gave onlookers a glimpse of his upcoming children’s collection when two trendy tots came strolling down the runway in flower girl and best man attire. Julien’s latest collection certainly didn’t disappoint. The materials, shapes and cuts was overall perfection. Let’s not forget, MacDonald just made crochet sexy. Let that sink in.