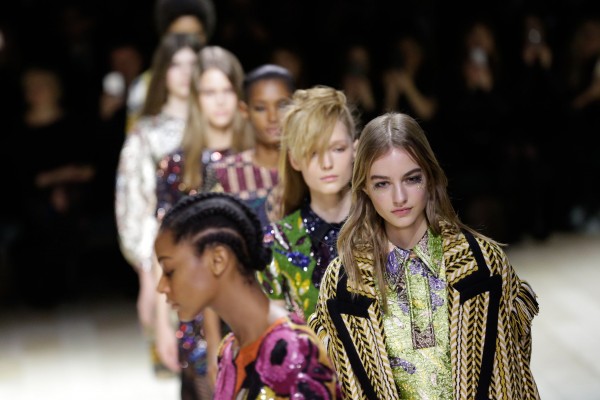 Kaleidoscopic art deco patterns on boxy tops and tailored shirts, ultramarine blue florals and a burnt sienna shift were all scattered on the runway for Rosie Huntington-Whiteley, Alexa Chung, Naomi Campbell and Suki Waterhouse amongst others.

Certain elements gave the collection a Boho feel with the chunky buckles on the bulky boots, flared maxi dresses and score by indie artist Jake Bugg. However it was equally as flamboyant with the multicoloured patterns and rusty metallic dresses. The show did not seem to adopt a singular motif establishing it as hybrid of different themes.

Although this ensemble of fashion could not exactly be labeled, Bailey still had an ornament for this show. From 60s inspired purse handbags to peeking out of pleated skirts, snakeskin seems to be the print for the Burberry’s colder seasons. It even worked on a 70s flared trouser that sported a side strip of cheddar yellow snakeskin.

Bailey reintroduced the Pop Art metallic florals (from Burberry SS16) adding sequin to some pieces, although it was flashy it did not take eyes away from the outerwear. Matching the erratic theme, each outerwear piece was unique in the show and had its own character.

Burberry’s iconic tartan pattern displayed itself on pea coats and bombers, the classic trench appeared in navy and olive with red piping, also including; a teddy-fur hooded puffa-jacket, a vinyl raincoat, and an olive yeti-fur coat, to name a few.

As assorted as the show seemed, a single shift dress enclosed the theme of the show in one piece. The harlequin sequin florals within the thick cotton lace looked similar to that of stained glass – organic in print and a mixture of Art Deco and Abstractism. This intricate piece was accompanied with the recurring snakeskin handbag and combat boots which seem to be quintessential for this coming season.

Burberry showcased a little bit of everything on the runway and in the midst of fabric and print pandemonium, a collection without a theme became a theme for Burberry’s autumn/winter 2016.