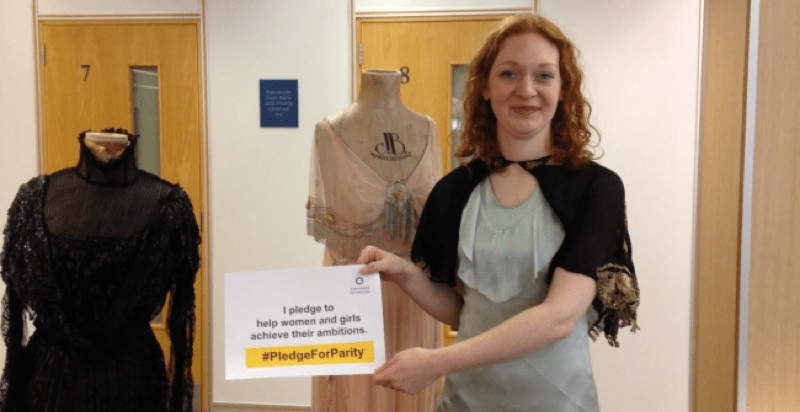 International women’s day is a global day that takes place annually on March 8. It is a day to celebrate the achievements of women across the world and the progress of achieving equality of men and women.

The Library and Arts Centre in Sunderland held a talk for International Women’s Day by the dressmaker and costume historian, Meredith Towne. The event was free and open to the public alongside other events put on by the library.

She said: “Fashion is so important, all the way through history women have fought through fashion to show their independence, their intelligence and the place that they want to take in the world.”

Towne used a variety of different dresses and accessories to show a timeline of clothing from the 1920s through to the 1950s. She discussed how restrictive early fashions were based on what they could and could not wear.

On the day to celebrate women it was incredible to see women of all ages getting involved and reliving their pasts though different styles of clothing. After the talk was over, Meredith invited all the women to the front to ask questions and to get a closer look at the accessories.

Dressmaker Meredith collects vintage goods and travels around the country doing talks about historical fashion. People send her items that may have belonged to an old family member.

She said: “All of these things would mean so much more if they had a name to go with them.”

Towne discussed how historical clothing tells a story of what was going on in the world at the time. The talk covered what things affected clothing such as World Wars and dances of the era.

Another supporter of International Women’s Day was North East shop owner Lyndsey Jackson. The vintage store Corner93 is in Sunderland and has a wide range of vintage goods ranging from clothes to furniture.

When asking Lyndsey how she believes fashion has empowered women she replied: “I think with doing what I do I think you can see a real change in the construction of clothes in terms of how they have mirrored a women’s role in society of the day.

As the years have gone on clothes have become a way to express themselves, you can portray a lot in what a woman wears and how she wants to dress to show her personality.”

Although this is an annual day to celebrate achievements and equality for women, gender parity is something that should be aimed for every day of the year. This is an ongoing thing and is something that we should aim to speed up.

Are you into vintage clothing? Check out Corner93 at corner93.co.uk/.