Mind is a charity that was founded by Stephen Fry, for those who are suffer from mental health issues. The charity supports and guides people on the next steps they should take, helping them to understand their rights and make them aware of the support that is available.

The members of RAG society hold the fashion show for a different charity in mind every year. Last year, over £2,000 from the RAG fashion show was shared between The Caroline Rainbow Foundation and The Albert Kennedy Trust.

Ellie Higgs, 22 and Sara Macauley, who are both students, organised and arranged the RAG fashion show. Ellie Higgs commented: “Everyone at loves fashion and cares about fashion at university. It always brings a lot of money and is quite a high profile, classy event”. Adding her own reasons into why the show was a good idea, Sara Macauley said: “We are combining the fashion and the fashion to raise some money for something good”.

Before the start of the show, a champagne reception was held which lasted an hour where a DJ provided all the music whilst everyone talked over a few drinks before the fashion show commenced. Also, the reception had a raffle ticket and a Brewery stand where all the proceedings went towards Mind.

The prestigious front row definitely was made to feel as if they were at London fashion week. They were gifted with Jack Wills goody bags whilst the rest of the audience had All Saints good bags. The goody bags contained freebies, treats and vouchers which ranged from cocktail menus, special offers for restaurants and clothes shops.

Students offered to take part in the show as models for the good cause. There was mixture of both male and female models wearing brands such as Topshop/Topman, Jack Wills, Doc Martens and Have To Love.

The start of the show featured casual clothing from the popular high street brands Topshop/ Topman and Jack Wills. The outfits the male and female models wore showed the audience the items you can pick up from the shops with the latest seasonal styles. 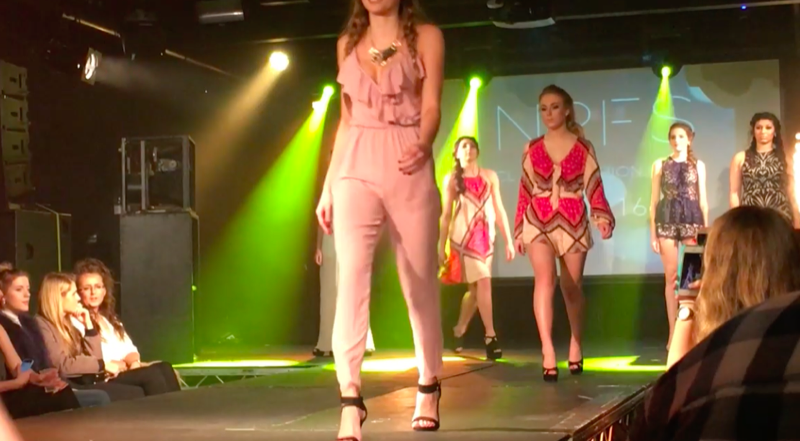 The Doc Martens collection ranged from monochromes to burgundy as it exhibited the famous Modern Classics Smooth boots in numerous ways but surprised us with other styles such as Sandals. Featuring a local womenswear clothing shop based in Gosforth, Newcastle, the Have To Love brand was shown support from the RAG society from the applause that came from the audience. Have To Love showed daywear and going out attires with their upcoming Spring/Summer 2016 clothing collection.