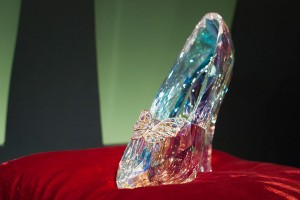 Powerful? Practical? Crippling? Comfy? – whatever your taste in footwear it’s certain to be reflected in The Bowes Museum’s major summer exhibition.

The Museum is the only UK venue outside London that will stage Shoes: Pleasure and Pain, organised by the V&A, which opens on 11 June 2016.

Taking the themes of transformation, status, seduction, creation and obsession, it features over 200 pairs of historic and contemporary men’s and women’s shoes by 70 named designers; alongside fantasy footwear such as the Swarovski crystal Cinderella slipper created for the 2015 Disney movie, and the ballet shoes made for Moira Shearer as she danced to her death in the 1948 tearjerker The Red Shoes.

The famous feathered Jimmy Choo’s created for Carrie Bradshaw will also be on display, as will the Adidas ‘Brooklyn’ football boots sported by David Beckham, and Kylie Minogue’s ‘Tail Light’ sandals.

However, there are shoes worn by unknown people which are just as spectacular, which affirm the agony and the ecstasy of footwear throughout 2,000 years of history.

Take the tiny Chinese Lotus shoes at just 7½ cm (3”) long, made for bound feet, exquisitely decorated with silk and sequins; excruciatingly painful yet still being produced in the early 20th Century.

Among other fashionable footwear were chopines – a type of platform shoe popular in continental Europe from the 15th to the 18th centuries. Originally used as a protective overshoe, their loftiness reflected the importance of the wearer; the higher the chopine the higher the status, with some reaching almost impossible heights.

The exhibition also includes a pair of leather and suede platform heeled sandals, c 1945-49, worn by Queen Elizabeth, the Queen Mother, who was patron of The Bowes Museum Friends for 40 years until her death in 2002, made by the prestigious UK company Rayne of London.

Here Design, whose client list includes the V&A, Fortnum & Mason and Nigella Lawson, have been drafted in to design the exhibition at The Bowes Museum.

The Museum’s Keeper of Fashion & Textiles, Joanna Hashagen, said: “They are high end London designers, and we are working with them to produce what we believe will be a fabulous interpretation of this subject.”

If you’re anything like us you’ll be so excited for the Shoes: Pleasure and Pain exhibition!

Shoes: Pleasure and Pain opens on Saturday 11 June and runs until Sunday 9 October. Tickets are on sale NOW via the Museum’s website at www.thebowesmuseum.org.uk, where there is a direct line on the homepage and exhibitions page. They can also be purchased directly from ticketmaster at http://www.ticketmaster.co.uk/venueartist/453005/2206180.

For those booking before the end of April the Museum will absorb the cost of the booking fee so there will be no additional charge to pay on top of the normal admission fee.