The creation of Denim was an accidental discovery in the 18th century when some people in France tried to replicate a fabric called serge de nimes. Get it? ‘denim’ the origin not to be mistaken with when Levi Strauss brought denim to America in 1853.

Denim jeans were popularised in 1955 by James Dean in the film ‘Rebel Without a Cause’; and worn by others such as Marilyn Monroe, Marlon Brando, and even Elvis (doesn’t need a second name) Presley. These celeb icons made jeans the look of teen rebellion and paired with a denim jacket to match it was the great denim on denim look that we still call back to today. 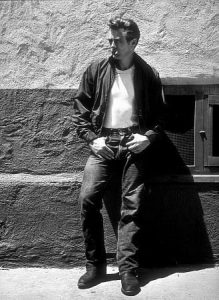 This look continued to the 1960s where jeans were still rare with adults and weren’t accepted in professional places like schools and offices, and not even restaurants or theatres.
In 1969 the bell bottom was introduced this led into the 1970s when bell bottoms were popular with both women and men until they disappeared again until its comeback in the 1990s.

In the 70s designer jeans would come to be with designers such as Calvin Klein. The 70s was also the punk era going out in your ripped jeans and denim jackets with torn off arms was the new way to be the rebellious teen. At the opposite side of punk the denim skirt was being created. This was created as a way to recycle old jeans, they started at a regular midi length but as things do so many different styles progressed as the years went on getting Aline, minis, and pencil skirts that never stop coming in and out of trend. 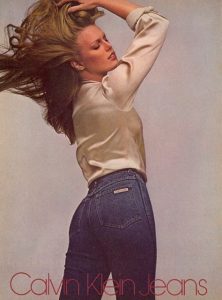 Patti Hansen models her calvins in 1979