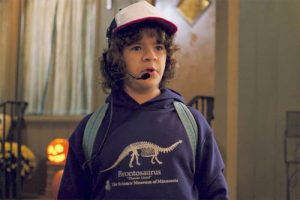 The website of The Science Museum of Minnesota crashed earlier this week due to the high volume of people wanting to get their hands on an item of clothing featured in a recent episode of the new series of  cult Netflix series Stranger Things.

The museum sold at least $3 million worth of the purple Brontosaurus hoodie, worn by Dustin (Gaten ) during the first episode, in just one day. The jumper was usually sold way back during the mid-1980s part of a travelling exhibit but it was found online by Costume Designer Kim Wilcox whilst she was on the search for vintage outfits for the cast to wear.

Demands for the Dino hoodie went through the roof and the Science Museum of Minnesota quickly noticed, making a promise to restock the vintage piece.

Earlier this week it made its reappearance on the museum’s website but it didn’t last long with over 80,000 hoodies being sold in one single day, the high volumes of demand even caused the site to crash temporarily at one point. Crowds also formed outside the actual museum store with queues of people flooding out the door desperate to get there hands on one of their own, they sold out before noon on Tuesday with more being brought in on Thursday.