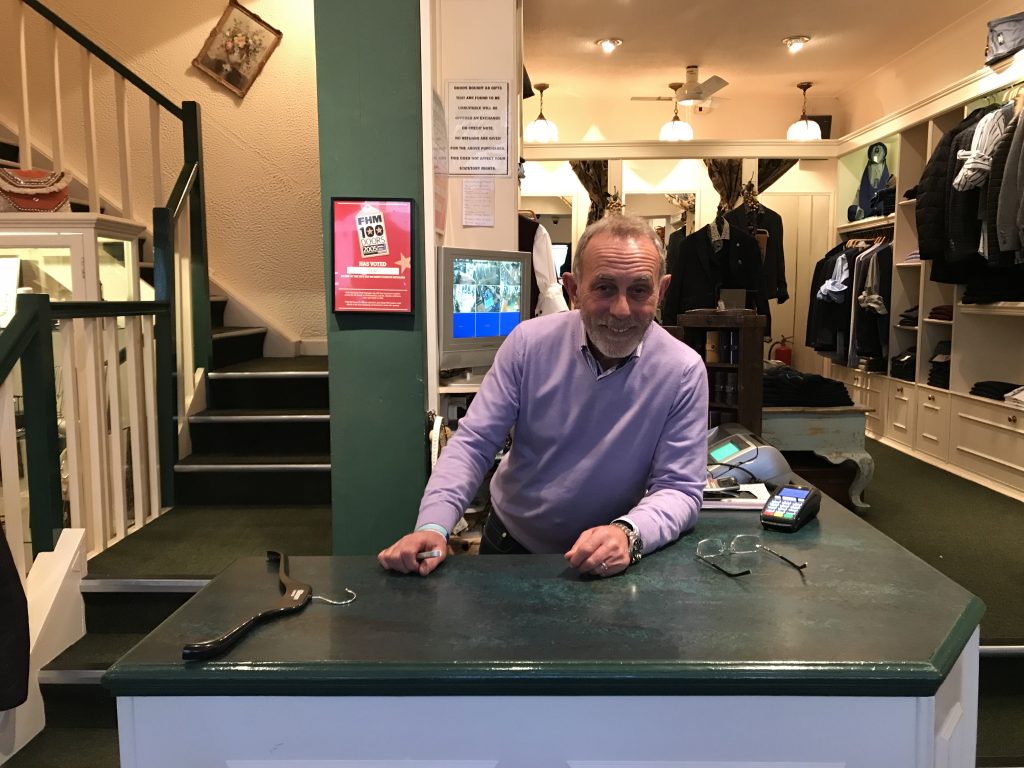 If you exit Monument Metro station via Blackett Street, head east and then turn right onto Pilgrim Street, opposite the old fire station you will find Leaf Clothing.

When you walk through the doors, you will be greeting by the incredibly charismatic and charming Brian William Smith. His welcoming, friendly, manner will put you at ease instantly and can add an immediate ray of sunshine to a dull gloomy day.

Brian has a tan complexion, brown eyes and short greying hair. He looked dapper in what he described as his “casual Monday wear” –– a purple V-neck jumper with a striped purple shirt.

Sixty-three-year-old Brian from Stanley, County Durham, established Leaf Clothing in 1978. Becoming a tailor is not what he initially aspired to be… he wanted to be a racing driver — and still does.

While in his mid-teens, Brian started his first job at Jackson The Tailor.

“I either had to go to college or I had to get a job. I went to the college one day and I didn’t like it, so I got the price of my bus fare off my mam and she said: ‘if you don’t come back with a job today, you’re going to college’, so I walked into a shop and got a job straight away as a Saturday boy,” said Brian.

He left Jackson The Tailor after becoming the youngest manager they had ever had.

“I went out of the clothing game for a short period and into the finance side of things. When I was 21 I managed three boutiques: one in Savile Row; one in Sunderland; and one in Middlesbrough, called Sergeant Peppers. From then I thought I’ll move on and have a go at trying to do it myself, and that is what I did in 1978 and I have been here ever since.”

A few years later, Brian married his wife, Josie, who now co-owns and works with him at Leaf Clothing.

“Josie and I have been married for 36 years, we met when I had gone into a friend of mine’s shop on Grey Street called Pastiche and Josie was working in there at the time,” he said.

Brian prides himself on maintaining a top-level customer service and offering a unique and personal shopping experience to ensure that his customers continue to return.

“We give a service. We take time with people and it’s not a case of ‘well it’s over there’.

“After 40 years, a lot of our customers have a trust in us. The best part is when you put somebody in something and send them out the door and they’re happy… they’re really happy.

Brian explains how he tries to buy garments that are individual and not in any other stores in Newcastle, which is what makes his business differ from those on the high street.

However, it does not always work: “If we bring something in, you can find that the bigger stores — if we’re doing well with it — will pick up on it, and then people want to deal with the bigger stores.”

What makes a brand worth investing in?

“It all depends on how its put together, how it’s made –– the fabrics and the fit. We’d never buy a brand just because it’s a brand. We go out and we look at the individual garments and see how it’s put together and see the fit. The fit and the fabric are the most important things.”

Brian describes his personal style as “pretty casual”, stating that he tends to wear “just a sweater, a pair of jeans and some shoes”.

“But I do like to wear a suit, I always feel good when I’ve got a suit on.”

Newcastle retailer, Marcus Price, was Brian’s only inspiration, and a man that he had always respected.

“I always thought that he had the best shops in Newcastle. I can remember buying my shirts from him when I was a young boy such as Ben Sherman and so for all that time when I was 16 right up until only a few years ago when he retired.”

After a successful 40 years, Brian’s main goal for Leaf Clothing is to just keep going.

“An independent business is a hard job to keep going now with all the big stores about. If we can keep it going and keep the customers happy then that’s number one.”

Brian thought that his 26-year-old daughter, Megan, might have been interested in working at Leaf Clothing, and if that had happened, he would have considered moving into a bigger store and have become more computerised. Megan, however, pursued a career as an actress and works in London.

The most satisfactory moments in Brian’s life are when he got married and when he had his children. He has won a few awards such as the Nicest Man In Retail and FHM’s 100 Doors. But it is the little things that he finds most rewarding, like seeing customers walking down the street with his carrier bags.

If there’s one thing that Brian wished he could have done — it is putting together his own clothing range.

“There were lots of times when I’d thought about it but you couldn’t do it on a small scale, it would be so expensive to do which is why I haven’t, but I have helped with designing.

Brian is happy and is looking forward to his retirement: “I’m excited to do a little bit of travelling and to enjoy life.”

He has travelled before — to countries such as Italy, Denmark, Amsterdam, Poland and France — but they have all been work related.

“I’d like to travel when I have the time to sit and have a coffee, and watch the place go by.

“When I’ve travelled, I’ve been literally off the train and to the show, from the show to the hotel, from the hotel to get something to eat and then back to the show the next morning. By the time you have finished at the shows you’re too tired to go out.”

Brian is going to Italy again in January.

“I’m going to the big show at Pitti to see if there’s anything new and fresh.”

He would like to see more of Europe, but for the meantime, Brian’s roots are firmly planted in his reputable store in the heart of Newcastle.