Alongside the rising Feminist movement of the 20th century came the reprobate of toxic masculinity; seen by activists as the explanation for male violence and the desires for dominance over women. More recently, toxic masculinity movements have raised awareness of the stereotypes and expectations which are imposed upon men from an early age. The most harmful aspects of toxic masculinity are perhaps, the presumption that all men who show emotion are weak, and the belief that a man who partakes in any form of activity which, is not considered strictly masculine, is emasculated – not a proper man.

These overwhelming statistics make it clear that toxic masculinity is not just an issue which negatively effects women (through domestic abuse and sexual assault).  It causes undeniable and detrimental issues for all men in terms of mental health as well as how they characterise their own self-identity.

Attributing to the standards young men are held too, are the actors, singers and celebrities of Hollywood; with ridiculous diets and rigorous exercise regimes, many male VIPs have managed to create an unattainable stereotype that society now expects men to follow. Additionally, through the rise of social media, images of other people are continuously blasted into the minds of young people, as a result, it becomes almost impossible to avoid indirect comparisons between yourself and others, furthering toxic masculinity as young men feel they have failed to live up to what is expected of them. Due to this distorting effect of social media on the depiction of masculinity, feelings of inadequacy in relation to physical appearance have perhaps become more widespread among young men.

However, in recent years there have been significant advances – as young men in Hollywood have begun to challenge societies’ model of male appearance, sexuality and behaviour.

One way this has been done is through fashion. 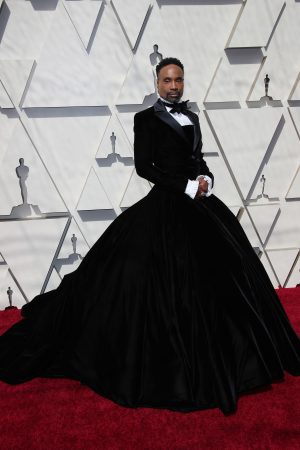 A recent role model in diminishing toxic masculinity is Billy Porter, an America performer, singer and actor, who attended the Oscars in a Tuxedo style dress; following in the footsteps of other celebrities such as Ezra Millar and Jaden Smith who have rejected the confines of typical male fashion by wearing items of clothing typically considered to be feminine.

Porter, about his outfit: “My goal is to be a walking piece of political art every time I show up. To challenge expectations. What is masculinity? What does that mean?”

Additionally, YouTube group the Try Guys, have also been a significant force in promoting a liberated and positive depiction of masculinity. 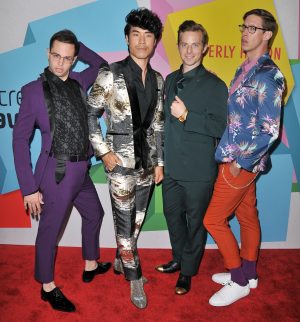 The group has published videos challenging the stereotypes of men in society, as well as promoting men being shown in positions of emotional vulnerability; encouraging feelings to be felt, instead of being hidden. Videos such as ‘The Try Guys Get Makeovers From Little Girls’, ‘The Try Guys Take A Mental Health Break’ and ‘The Try Guys Get Nail Extensions’ are just three examples of how the group has broken down walls of toxic masculinity.Additionally, YouTube group the Try Guys, have also been a significant force in promoting a liberated and positive depiction of masculinity.

Starting with celebrities and social media influencers, fashion and social media have recently acted as forms of fluid expression, through which societies’ typical depictions of male beauty standards and emotional behaviour are questioned. As these progressive actions become more mainstream and acceptable within society, hopefully the issues of appearance, sexuality and behaviour will in turn be less pronounced in the lives of men – both on and off the big screens.

The eyeshadow palette I …

Burberry take on the …