I know nothing about fashion. Opening with that line should defuse a lot of confusion, anger or even disgust at the article I am about to write. Some large part of me feels quite misplaced, like I shouldn’t be writing about fashion whatsoever. That large part of me has been quelled completely by a desire to write about fields of journalism I know nothing about. Diving in at the deep end, my outlook on fashion is to some a completely basic, foundation level of consumerism. To others, it’s an expressionless void that I’ve been assured borders on offensively horrible in taste. Actually, it dives lower than that, nosediving into t-shirts, double denim, poor fitting jackets where the sleeves hang off over my hands and a handful of other choices that bring into question my ability to not only pick out a suitable attire but also my ability to dress myself without looking like I’ve fallen into a charity shop clothes outlet.

Frankly, it’s not that I don’t care for fashion, it’s just that I don’t care to express myself through what I wear. Usually I use my writing to express myself, but I find that’s rather difficult to do when all you write about are films, music and politics. My brief flirtation with fiction writing is dead in the water, that brief chapter coming to a close years ago. More often than not I’ll be wearing a palette of mismatched grey and black, with at least something plastered onto the front of a t-shirt that I’ll have ordered off of Redbubble or, if it’s a special occasion, something I’ve ordered off of Amazon when drunk. My most recent purchase reflects the latter category. I hold in me a fashion sense that would embarrass regular contributors to this website, they obviously know a lot more about fashion than the man who has just ordered himself an ironic Louis Theroux t-shirt because he was bored on a Saturday night. 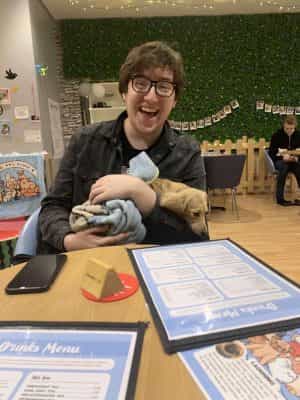 There’s nothing wrong with a bit of double denim, is there?

My lack of fashion expertise puts me in the predicament of keeping my outfits simple, if not a touch affectionate to my own hobbies and interests. I’ve made some embarrassing purchases when it comes to clothing, and the only reason I still have them around is because they still fit. Believe me, I’m not leaping at the opportunity to wear a t-shirt that has the ill forgotten film Mars Attacks! on the front of it, but I see no reason to throw it out just yet. It’s a memento to my work and even though it’s quite a bad film, it means a lot to me. For a majority of the t-shirts I own, they do have some semblance of connection to my life. Mars Attacks! was one of the very first films I ever reviewed, in a thankfully long-lost piece of work that kindled an interest in arts journalism.

In a world where I had the time to care more for my fashion sense, I’d ideally want to follow my fashion icons. But in the same world where, after heavy deliberation, my few fashion icons consist of people like 90s Britpop frontman Jarvis Cocker, I’ll be steering clear of expressing those funky and flamboyantly chic fashion choices. I think chic is the word? Again, not a journalist of the fashion variety, so I could’ve called Cocker’s silk blazers and stringy slim ties the equivalent of a crime against fashion. They probably are, but that time period of velvety jackets and outlandishly stupid, ill-fitting overcoats appeals to me in some truly bizarre way. I’d never have the gall or confidence to wear something like that, but I like to think that I would if I held feelings that were more than ambivalent toward style.

Every few years, I’ll attempt to re-invent my range of clothes (which consists of just buying a new t-shirt and jacket), changing my hairstyle (by getting a slight trim) or just doing something so subtly different. The most recent change has been the hair again, with the big change for this year being a middle parting, rather than just an uncontained mess which had similarities to what a hay bale tornado would look like. Even this tiny change is enough for me to give myself a pat on the back, feeling more and more comfortable as I slip into some form of deformed denim coma.

Maybe it’s best that I leave fashion, trends and style to those that work within this field, so long as they leave me alone to write about French New Wave expressionism in the films of Jaques Demy. I’m not the only one with words like chic, two can play at this game.

How to create the …

Introduction to me: Lauren …

The only way is …