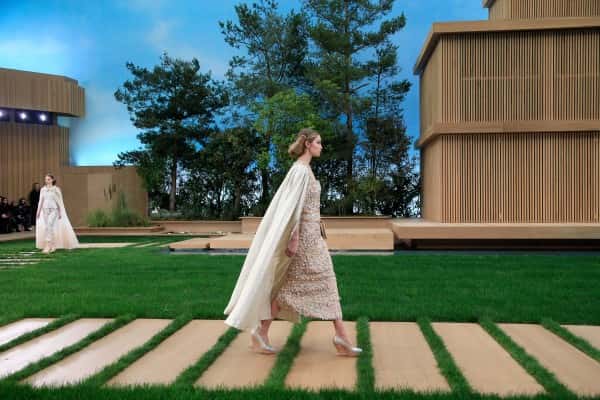 The one thing we expect from Karl Lagerfeld, creative director of Chanel, is a fabulous show, and once again Lagerfeld succeeded our expectations and showcased a true spectacle with his 2016 Haute Couture Collection.

As the second day of the couture shows commenced yesterday morning (January 27) at Le Grand Palais, the crystal palace was almost unrecognisable as the set comprised of a futuristic oriental wooden house surrounded by a minimalistic garden scene.

Once again the Chanel evening wear wardrobe had us on our knees in awe; this time with its post-Edwardian elegance,  pussy-bows, long lines and fur jackets, as well as butterfly wings and capes.

Although minimalistic, the show combined many aspects of oriental and historic aesthetics. Egyptian style eyeliner framed the models’ eyes in a sultry black in contrast to the ethereal garments they wore. Long silhouettes mirrored the thirties fashions, popularised by Coco Chanel herself.

Colours of light pink, white and soft-browns took to the stage in forms of column dresses, paired with textured jackets of fur and lace, topped with translucent sparkly capes that fell two foot behind as the models, including Kendal Jenner and Gigi Hadid, walked across the stepping stones. 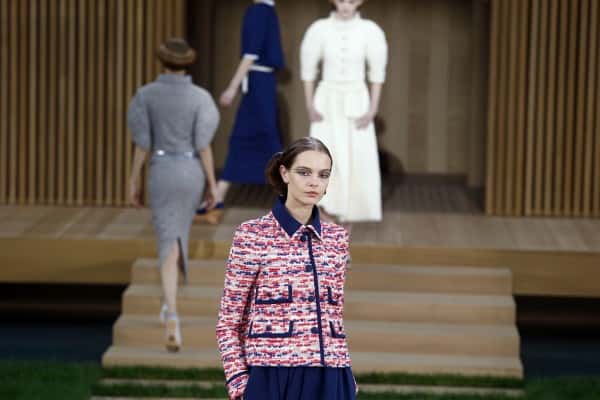 The hemline of each dress finished just short of the calf showing off the cork wedges, each with a rounded toe and a curved heel.

Chanel hair stylist, Sam McKnight, gave the models each the ‘Chanel croissant,’ created with wired croissants fitted to each of their heads. A true Picasso crossed with Princess Leia if you will.

One piece that stood out was a textured light column dress, with floral decoration across the bottom of the yoke and across the hem, styled with a thin gold belt to which a simple bag was attached, only big enough to fit an iPhone. Although sleeveless, the model wore a sleeve cuff of the same material, again with a gold band around the top.

In the grand finale of the show, as Chanel are known for their big finishes, the wooden house opened up, piece by piece, a bit like a 21st century dream house, showing each piece of the collection, and finally, Lagerfeld next to his two stars of the show, Mica Arganaraz and Baptiste Giabiconi– dressed as bride and groom. 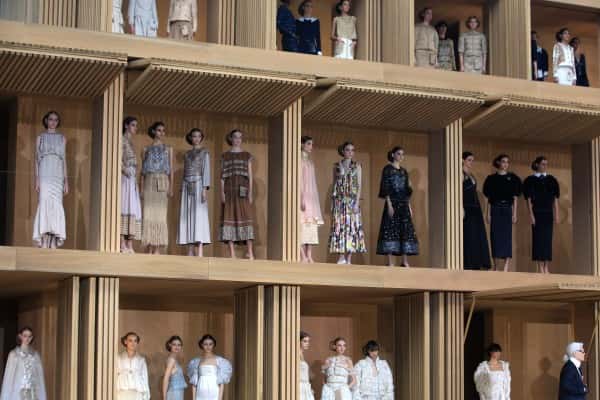