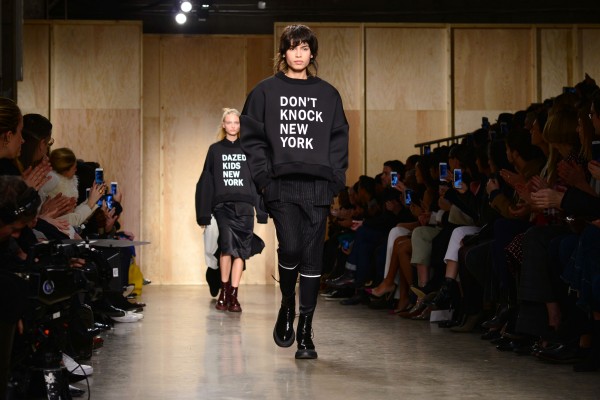 New York, I love you and you’re not letting me down! Certainly not with the DKNY aw16 collection that hit the runway on Wednesday night in New York City.

It’s fair to say the eight minute long DKNY show had it all!

The 2016 collection very much had a 90’s vibe going on, designers Dao-Yi Chow and Maxwell Osborne are bringing their era back and nobody is messing with it.

Model’s came out rocking black over sized sweaters, which poked fun at other rival designers. Talk about fighting off competition! The sweaters featured statements such as; “Designers Know Nothing Yet” and “Don’t Knock New York”. 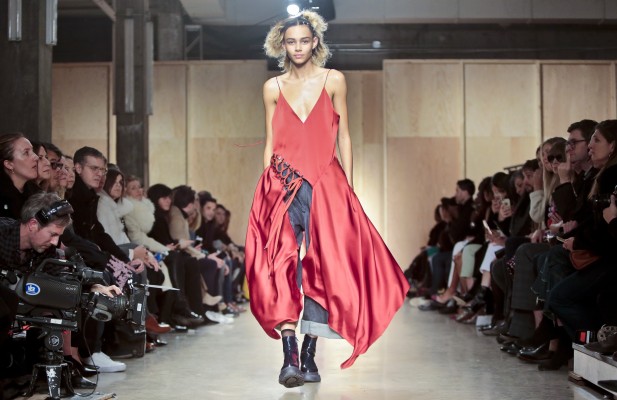 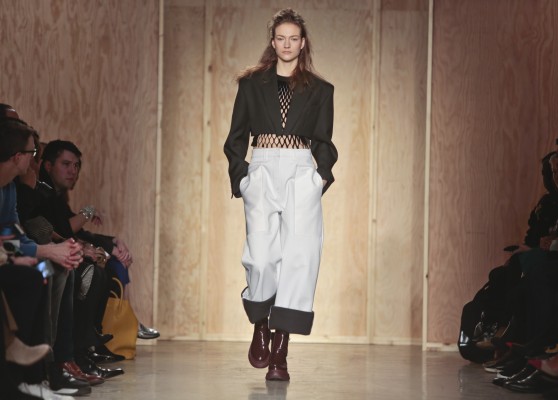 The purpose of the fashion was so people could express that tomboy feel that was influenced by the 90’s. Chow and Osborne want to have fun with fashion and want people to reflect that.

As for the men’s fashion; it was smart, sophisticated and damn right sexy. DKNY turned jackets, jumpsuits, shorts and trousers into cropped items with pinstripes, running throughout.

Some looks included accessories that added another element to complete the look. The main fashion accessory that was spotted was many fabulous leather handbags’ that added a professional aspect to the look. It gave the certain vibe to the looks that made it feel like this is the type of uniform you don’t have to wear but you want too, it showed confidence in the designs.

Each look was then finished off with the traditional footwear, thick rubber black and brown boots that DKNY always features in their catwalk looks.

All female models wore a half up and down hairstyles, which complimented the looks by adding a bit more of that 90’s feel into the looks. To finish off the look completely, the models also wore flawless natural make up look.

As this fashion line is influence by the city that it is made in, it is very obvious that it runs in the clothes as well. Its safe to say DKNY rocked fashion week.