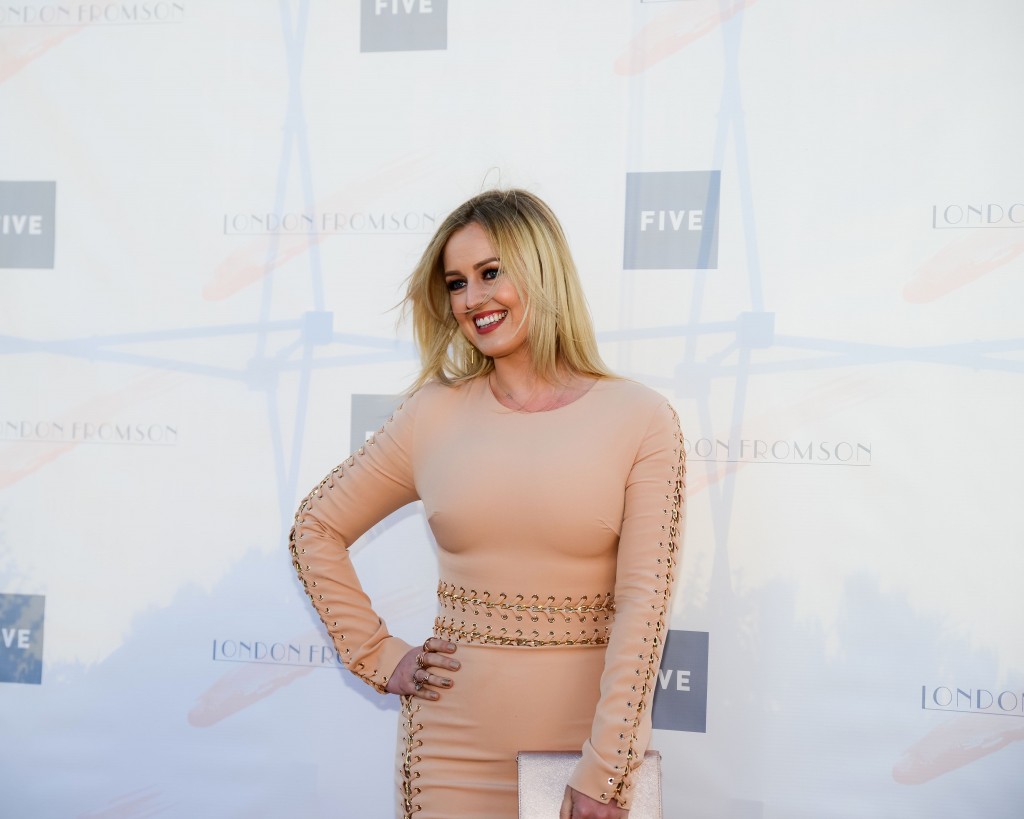 Elisa Fromson at the Launch of her new business, London Fromson, in May

Millions of us across the globe tune in for our weekly fix of Keeping up with the Kardashians for a tiny glimpse into the rich and famous lifestyles of the world’s most famous fashion sisters.

But for Sunderland-born Elisa Fromson, rocking up at the multi-million pound Calabasas home is simply a matter of clocking on for work.

That’s because Elisa has landed a job as Kris Jenner’s go-to assistant who helps manage her hectic diary and ensure life runs smoothly for the busiest mum on the planet.

When Elisa, 28, uprooted her life five years ago to move to sunny Los Angeles, she only intended to stay two years to study Merchandise Marketing at LA’s prestigious school, the Fashion Institute of Design and Merchandising (FIDM).

The internship she’d landed at Jenner Communications was to fill in the time during her studies, until she went home with Kris to help out on the former PA’s last day, and became the permanent new assistant.

She refers to the globally known media circus as ‘the family’ and attributes her growing drive for success to her boss.

In an exclusive interview with Fashion North from California (via Facetime) she said: “Kris is the most supportive, motivating, inspirational boss that anyone could ever wish to have.”

Now, her daily routine consists of 40-minute drives through the hills and to the Calabasas home of the TV family, for an 8am start.

“There are days where I’ll go and I’ll work for the family. I’ll get up and go and it depends what’s on their schedule to how my day is going to go. You never know who you’re going to open the front door to!”

She makes it clear the Kardashians are no slave drivers and life as a celeb PA is like any other office job. “A lot of people think that it’s 24/7. It’s like any other job. You do your hours and still get time to spend with friends and whatever else. It’s definitely not anything crazy.”

Even with such an overwhelming job, she’s worked hard to fulfil her ambition of making it big as a make-up artist following in the footsteps of Joyce Bonelli and Jen Atkin who built their businesses through Kardashian association.

“It’s really inspirational to see people who are doing what you want to do”. Growing up in Sunderland, Elisa and her hairdresser mother would host the pre-night out glamour sessions where her favourite part of the evening would be getting ready.

She reminisces about the days of her youth in the UK: “That’s my favourite part of the night. Once my make up’s on I’m like err’, I don’t want to go now, I’m good.”

With the support from her mother and father and the memories of his yelling, ‘you’re never ready on time, you’re always the last one ready’ spurring her on, Kris Jenner and some of LA’s most respected people in the industry attended the launch party of Elisa’s make-up business, London Fromson in May this year – and names it her biggest highlight to date. 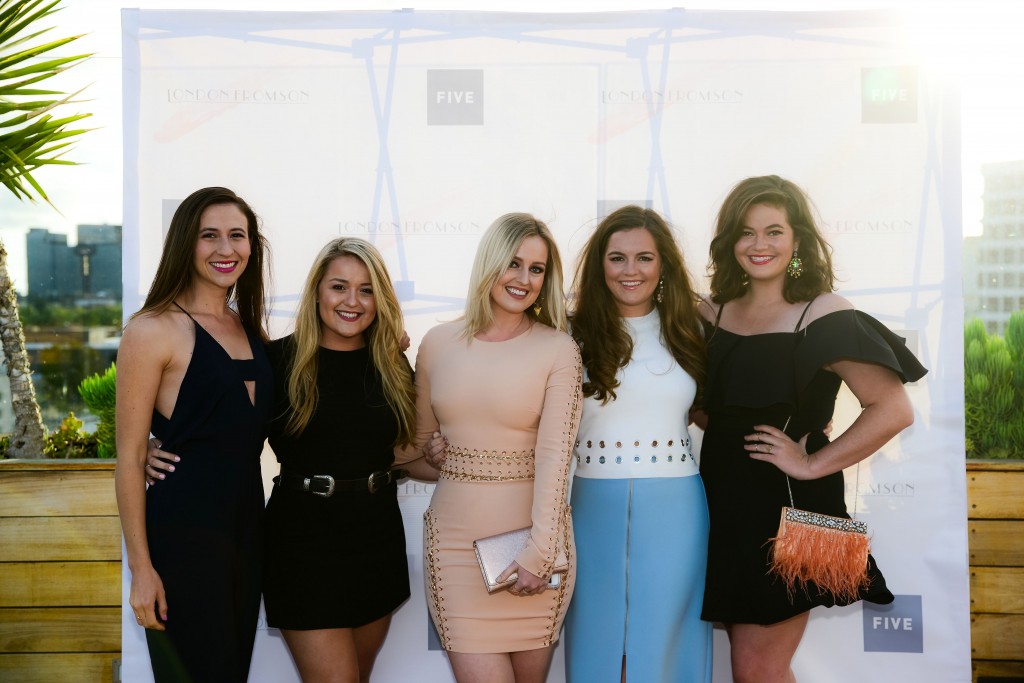 Elisa, centre, poses for a photo at the launch of London Fromson

“When I moved to LA five years ago it was literally to do two years at FIDM, one year on a work permit and then I was planning on moving back, so I never ever would have seen that. Even this time last year I wouldn’t have seen that in the pipe line”.

Managing her life and business around momager Kris proves easy for Elisa. The monarch of the family is ‘very supportive’ and works around the schedules to allow her to focus on her own business.

Being approached in the hope that she’ll take up Youtube, Elisa decided not to limit herself in her business and only be known for one thing. Like her former employer Tori Burch, she plans to brand herself, starting off with the extension of a false eyelash line in the near future.

Her life as an artist on shoots and for clients makes time off a rarity, but when she does it’s spontaneous trips to Disney Land, Vegas weekends, lunch next to Nicole Kidman and Gordon Ramsay at the Beverly Hills Hotel or sitting with the Tatums at Beyoncé concerts.

“We got moved into a VIP section so we were sat with Channing Tatum and his wife. We were literally four rows away so stuff like that is crazy. This probably wouldn’t happen in the Stadium of Light.”

Since April 2016, being among the elite of the celeb world on a one-to-one basis has normalised her run-ins with Hollywood A-listers. “I think because of where I work I genuinely don’t notice. I was in a restaurant the other day and Oprah Winfrey was there and my friend was like ‘oh my God’ that’s Oprah, and I was like yeah that is. But when I think of my job I wonder how did I even end up here.

“My mum’s very good at it. We were in a target once and she’s hitting me saying ‘Elisa, Elisa!’, I’m like ‘what?’, and she’s like ‘look’, I was looking at this guy and I was like ‘I don’t know who that is?’. It was Ben Affleck. She’s really good at noticing and I’m oblivious half the time. When I first moved here the first person that we saw was David Beckham in downtown LA and I think we were the only people who cared.

Despite living the life with the career, the celeb friends and the sun, Elisa comes to miss the home comforts of having her mum a telephone call away and texts from dad sitting in the Rosedene to remind her of the inimitable Sunderland humour.

With her roots in South Hylton and Millfield, her best friends, Olympic boxer Tony Jeffries and his wife Sarah, also from Sunderland, remind her of home. They met after a visit from her brother prompted her to pop into his gym, Box n’ Burn.

“As we were talking about the gym, the smart car covered in Box n’ Burn signs drove past and I was like, ‘wait, there’s the Box n’ Burn car’, so we pulled up to the side of it and it was Tony driving. So we wound the windows down yelling out ‘We’re from Sunderland!’ and he was like ‘No, so am I!’ and I was like ‘yeah that’s why we’re telling you, we don’t just tell everyone who we’re driving by!’”

“It’s just really nice and refreshing to have people around you who you don’t always have to be careful about what you say. Just that sense of humour from the North East is refreshing to be around.”

As she drove down the boulevard for the first time her mother knew ‘there’s no way you’ll only be here for three years.’ She’s decided California is where she’ll build her home. Her next step? “I’m happy in my job. I’m happy with the way that everything is working out now. I still have time for myself and I still have time to work on my business and I love working for Kris.

“I just have the best of all worlds right now so I don’t know. But, if Beyoncé wants to take me on tour then then that’s probably when I’d have to give it up!”

Elisa says the type of foundation you choose is situational and you should always plan ahead. If her clients are appearing on the red carpet or she makes an impromptu trip to sunny Disneyland California: opt for a matte foundation to avoid a dewy looking face. Her go-to must is Maybelline Matte Poreless Foundation.

“Just know why you’re doing it and understand why you really want to do it. If you pursue something for the wrong reasons then it’s not going to work out. It’s really easy to be blinded by the sun and think that everything is smoke and mirrors. Stay true to yourself and have a good support system who really keep you grounded and keep you being you. To be genuine too goes along way. You can always tell when someone’s not really being a genuine person but work really hard and if you really want to do it you will. You’ll find a way. Where there’s a will there’s a way”.