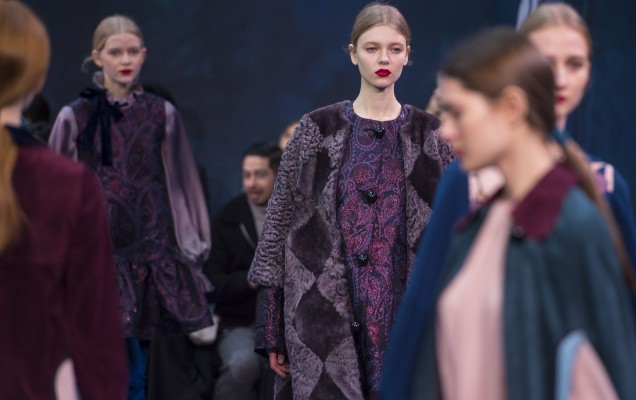 Have you ever dreamed of wearing a blend of the early 20th century silhouette mixed the bold fabric choices of the 70s? Now add in some 60s pop art and you’ve got the looks from the Roksanda Autumn/Winter 2016 show.

One reoccurring traits would be the high, flouncing collars and bishop sleeves. This not only gave the appearance of a stern, well-to-do woman, but it provided a striking resemblance to women’s wear in the beginning of the 1900s. The look would have read a bit too ‘school teacher’ if it weren’t for the outrageous fabrics they came in.

A velvet dress would seem insufficient next to Roksanda’s all-velvet navy blazer with matching bellbottoms, which were accented with a metallic cording. When this look came into the spotlight, all of the previous apparels were dwarfed by innocence in comparison. This is an ensemble that displayed a power figure who knows how to dress to impress.

The most interesting items to emerge were the velvet tights worn to accent many of the looks. This was a risky move that actually paid off in the end, as it provided the outfits with a consistent weight from neck to toe. With Roksanda’s use of strong shapes and large colour fields, the only thing that could hope to balance it out would be these outrageous tights that catch the eye.

While the styles differentiate from one another, Roksanda’s signature pattern of shapes and colour blocking remained. However, the usual bright colours were replaced with muted tones more fitted for the fall including burgundy, orange, and a dark teal.

This all was placed against a teal background that provided the perfect contrast against the warm hues and helped that orange to stand out.

Tying the looks together were simple ponytails at the base of the neck; a professional, yet powerful do that reinforced the ‘sensible’ shape of the clothing. No wander women with a strong presence such as Michelle Obama, Kristen Stewart, and Keira Knightley go for her looks. It may not be apparent now, but these garments could become the ‘new’ by simply reinventing the old.