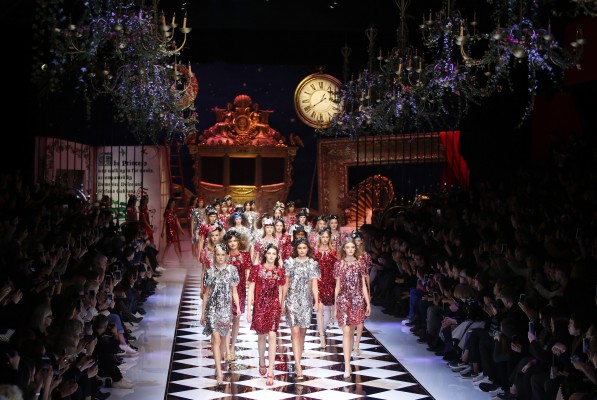 With an abundance of fairy tale fantasies, Dolce and Gabbana’s Fall Collection was the epitome of every girl’s dream. With a fable cast of Cinderella, Sleeping Beauty and The Nutcracker the spectacle was truly enchanting.

As the thunder boomed and the lightning struck from the depths of the mystical woodland backdrop, the clock struck and the tall black gates opened to reveal Cinderella’s carriage. As the room was lit, the models entered marching in time to the upbeat music of catchy Disney tracks, such as The Little Mermaid’s ‘Under The Sea’.

The show turned into a game of ‘Spot the Princess’ each look inspired by a different tale.

Cinderella wore a shimmery blue tinsel gown, styled with shoulder pads and a bow choker. Her minions wore white shift dresses decorated with silver embroidered mice playing about with needles and thread. The dresses hem line had a visible tacking stick around the neck, sleeves and down the centre of the dress.

Even Prince Charming made an appearance, opening the show in a black military jacket, heavily beaded and decorated with metallic brooches.

The footwear choices on the other hand, weren’t your average princess slipper; character shoes varying in colour, from pink to orange to black, as they stomped across the chequered parquet.

Some were true ‘Dorothy Shoes’, covered in red or pink glitter. While others were almost mechanical, silver like the shimmering moon with small spikes across the strap and toe.

As the show went on the tales untwined, candelabras and machine embroidered chandeliers decorated the bodices of the magical gowns.

The fantasy came to a end as the D&G model army paraded down the runway in fuchsia and silver tinselly shift dresses – a true happily ever after to a magical show.