The Greatest Showman premiered in Australia on Wednesday (December 20), and will be hitting our screens this Boxing Day. This uplifting musical with a brilliant musically talented cast including Hugh Jackman, Zac Efron and Zendaya bring enough star power to outshine every other film released this year.

Thank you @Oprah for choosing #thegreatestshowman soundtrack as one of your 2017 favorite things!

Hugh Jackman returned to the Land Down Under for the premier, where he and his wife Deborra-Lee Furness stepped out in matching suits. Power couples truly do exist and these two have had us saying “awww” since 1996 when they tied the knot! And despite a massive downpour, Jackman was more than happy to stand in the rain and take photos with fans.

Zandaya made the biggest metamorphosis at the Sydney premier stepping onto the red carpet as a beautiful butterfly. Styled by Law Roach she took everyone’s breath away with the stunning orange insect-inspired dress from Moschino’s spring 2018 collection designed by Jeremy Scott. 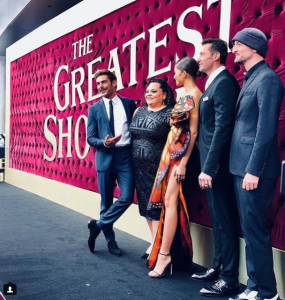 Zac Efron looked suave in a stunning navy tailor-made suit, skinny tie and matching suede shoes, but the thing that had people talking was the retro moustache. Efron is likely to be growing out the facial hair for an upcoming role where he’ll be playing serial killer Ted Bundy in “Extremely Wicked, Shocking Evil and Vile”.

The Greatest Show on Earth just got a little more glamorous. See the Golden Globe-nominated musical, The #GreatestShowman🎩, in theaters December 20. TheGreatestShowmanTickets.com