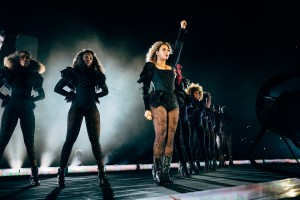 Fashion icons come and go and this year the Council of Fashion Designers of America (CFDA) awarded Beyoncé the title.

It’s no surprise that she won with her Givenchy dresses gathering so much attention from the internet and all the amazing looks in Lemonade.

Not one to disappoint Ms. Knowles-Carter accepted her award in a Givenchy  suit worn by Naomi Campbell in their SS16 menswear show and the over-sized black hat.

The singer went on to tell the audience how when she was starting out in Destiny’s Child, high-end labels turned her mother, Tina Knowles, away.

She then went on to talk about how her grandmother passed on her sewing abilities to her mother who helped create numerous outfits for the girl group.

“But like my grandmother, she used her talent and creativity to give her children their dreams. My mother and my Uncle Johnny, God bless his soul, designed all of our first costumes and made each piece by hand.”

She even said those outfits made her feel like a Khaleesi and that they were an extra suit of armour. But when she comes to Sunderland’s Stadium of Light, on Tuesday 28 June for her Formation World Tour, she’ll be rocking designer labels such as Balmain, Gucci, DSquared2 and Roberto Cavalli.

If anybody deserves it this year, it’s Beyoncé.