Women have come on leaps and bounds breaking stereotype in a patriarchal society but are we still judged on our looks in our careers?

Facebook. Instagram. Snapchat. All platforms in which we feel we need to look our best and meet the highest of standards set by the online world. So, should the work place be any different? We all know that within any place of work, we should take pride in our appearance as we become the face of that brand. But what if that brand or employer believed your appearance was not up to specific standards? Such standards like the colour of your skin, your makeup or even your weight.

There’s a fine line between discrimination and general requirements; a fine line Amie-Louise Slack, 20, encountered when applying for a job at a plus sized clothing brand store.  She explains: “I was looking for a part-time job to make a little bit more money as a student. It was a local store, so it was very convenient.”

“I saw the advert on Indeed and completed their online application form. I was so shocked when I went on to fill in one of the questions.”

The question Amie stumbled across on the retailer’s site was: “It is a requirement that sales advisors wear our clothing products as seen in the store, these start at a ladies size 16 and a men’s large. Can you meet this requirement?”

Amie continues: “I was so confused as to why it was on there and how my size would prevent me to do a job in retail. My size has nothing to do with my ability.”

Despite all this, the brand has not breeched any legalities by seeking such requirements. Amelia Wood, 24, who works in HR and deals with employment law says: “Under the equality act, size is not a “protected characteristic”, so unfortunately asking this question isn’t breaking any laws unless the applicant was registered disabled due to their size.”

“However, it is a very personal question which may upset some applicants when they respond to it. Size or appearance should not be taken into account in any regard, the only thing which should matter is if the applicant is suitable for the role which they have applied.”

But in a modern world striving towards perfection should the service industry be an exception?

“In a lot of customer facing roles and in the services industry, I believe that appearance does have a huge impact on whether someone could be employed,” Amelia explains. “There are hundreds of articles written in HR blogs about how people struggle to find jobs because they have tattoos on show etc.”

Such people include Joe Parsons who appeared on This Morning after being rejected from several jobs. He believes his tattoos are the only thing in his way. And he is not alone. According to the BBC a study commissioned by ACAS carried out by academics at King’s College, London, suggested tattoos are still very much frowned upon in workplaces.

But it is not just the application process in which we see unfairness throughout workplaces. Earlier this year Charlotte Tilburry made headlines when she expressed her beliefs about women wearing makeup to get ahead in their careers. When speaking at the Debrett’s 500 Gala she said: “Make-up is very empowering, and women should celebrate this weapon in their arsenal. Women need to wear make-up to get ahead in life – in their careers, in their personal lives, whatever it is.”

She then went on to saying: “Studies have been done at Harvard, Procter and Gamble and Stanford University that prove women earn up to 50 per cent more money by the way they do their make-up and hair.”

But is there any truth behind these claims? Could appearance be the key to success in our careers? FairyGodBoss is a website that allows women to leave employer reviews. They carried out a study with 500 hiring professionals in which they were asked to rate the top three traits of a female. They were shown images of the candidates who all had different ages, race and body types. What they concluded with the study? FairyGodBoss said: “Women today are still judged on their appearance, no matter the context.” You can read the full report here. 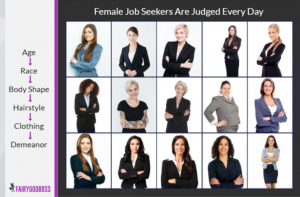 While women have continued to reach milestones within society the notion of being judged and even employed based on appearance brings us straight back to square one. And with the concept of perfection very much encouraged by “the perfect selfie” and the idea of a “flawless” Instagram feed it is unlikely that we will ever become a world not driven by looks and appearance.

However, if you do feel that you have been discriminated against in a job application process Amelia advises: “You should contact Citizen’s Advice. Citizen’s Advice will be able to give free and impartial advice to help determine if you actually have a case to put forward and what you can do address this appropriately with the organisation.”