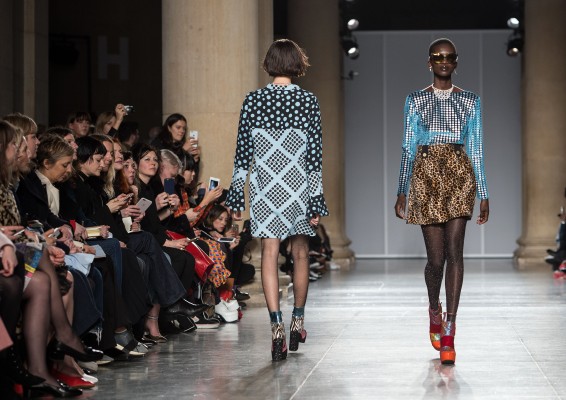 We all expected colour and excitement in House of Holland’s LFW show, and that’s exactly what we got. Glamourous rock and roll vibes made their way down the catwalk with sparkles, ruffled layers and a whole range of print clashes. Henry Holland created this collection with our inner party chick in mind.

As usual, Holland received an all-star FROW including Charlie XCX – who has just launched House of Holland’s eyewear campaign – alongside best mates Alexa Chung, Pixie Geldof and Nick Grimshaw were of course there to cheer him along; as well as Daisy Lowe, Caroline Flack and Nicola Roberts. 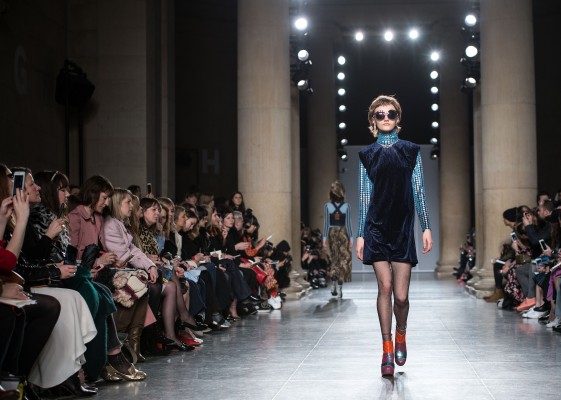 Shimmering tights worn on each model showed how keeping warm this AW doesn’t have to ruin an outfit; it can make it a lot better. They gave a simple yet exciting touch. Platform boots added to the look with their range of patterns and decorative fabric from zebra print to leopard print to holographic pink and blue shades to red, blue and pink PVC.

Golden metallic co-ords, ruffled layered skirts and high-neck sheer polka dot blouses showed a darker tone to the collection. As did the mirrored sunglasses and thick dark turtlenecks. But the mix of prints that followed caused a wave of camera flashes and lusting eyes.

Large beret-styled fur hats met with long leather gloves and sequinned dresses with glittery fringed hems, is AW16 the comeback for the flapper girl with a rock chick makeover? Of course!

Holland is known for its clashing of colour, print and fabric. You name it, Holland’s clashed it. But that’s what we love. House of Holland’s AW16 collection is a house full of fun and we would love to live there.