Miss Junior Teen Great Britain, Harriotte Lane, is up for a National Award for her hard work and recognition with charity fundraising.

The Tyneside teen, who has modelled for Love Niche, Always Wear Red and a number of other local up-and-coming designers, has been nominated as “Positive Role Model” in the age category as Part of the National Diversity Awards; which recognises work of individuals and organisations that work in the community to create inclusion and inspire others.

Harriotte said: “I thought it [the nomination] was a spam message and was about to hit delete! Then, I read it more and sat shaking my head.

“Since that moment I have been nominated for the award by over 100 people. I was in tears reading the nominations, it’s so kind what people have said and I’m humbled by it all.

“Just like when I won Miss Junior Teen Great Britain, the real prize is the platform it gives you to do more good work and raise more awareness of charities and social issues.

“If I win, it would certainly give me the opportunity to go on doing more work even when I hand my title back in October.” 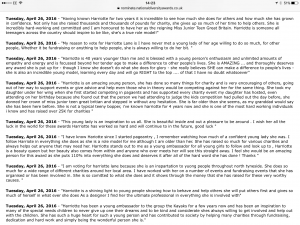 Harriotte said she is “humbled” by the amount of response for her nomination.

The 15-year-old, from North Tyneside, who won Miss Junior Tyne and Wear before being crowned Miss Junior Teen Great Britain, has been deeply involved with charity work across the region, raising thousands of pounds for brilliant charities.

“I’m normally up to some sort of crazy stunt from zip wires, abseiling, assault course, anything that is a challenge,” Harriotte told us. “The zip wire was the most scary yet exhilarating thing I’ve ever done! I travelled at over 100mph, for over 1mile, 500ft in the air over water! I will be doing it again next year.”

Over the last two years, the teenager, who is also the young Ambassador for The Kayaks which helps children with hidden disabilities and their families, has raised over £27,000 for a number of charities; and hopes to hit the £30,000 total by the end of the year.

Harriotte goes on to explain: “The Kayaks do so much amazing work, a real local hero as an organisation and the children are just the most amazing bunch.

“The Christy is another major charity I fundraise for, like many of us our lives have been touched by cancer, either by personal experience of the loss of a loved one.

“The Christy are the biggest research and provider of life saving cancer treatments, they are the key to more people surviving the awful disease that takes too many lives too soon.

“I’m hoping to raise over £3000 this year for them, the same amount I raised last year.” 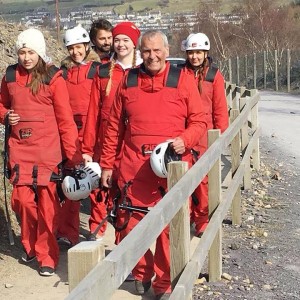 The inspiring role model, who has appeared in her own Anti-Bullying Campaign and Winner of the Chronicle’s Champion awards, whilst juggling beauty pageants, modelling, fundraising, equestrian hobbies and school work, is a perfect example of true dedication and passion to the community. How she manages to do it all with such grace and professionalism at only 15-year-old is amazing!

“Later this year, I’m doing something less dangerous [than zip lining] and more glamorous by hosting a Ball,” Harriotte reveals.

“Just sorting dates and a venue out at the moment so watch this space!

“Also working with the amazing photographer, Chris Patterson, on a crazy project that will hopefully launch at Newcastle Comic Con later this year”.

Cast your vote for Harriotte and to check our her other work visit the National Diversity Awards website here. 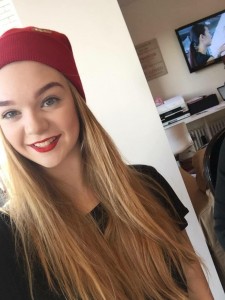 Totally crushing on Urban Decay’s new Alice Through the Looking Glass pallet, hoping to grab one on Saturday when I’m in London!

What’s your favourite item of clothing in your wardrobe right now?

My Always Wear Red beanie! I like to stand out as an individual and like to dress confidently and I’m my own style as opposed to following trends. (Shop at www.alwayswearred.com)

What can you never leave the house without?

What’s been your proudest moment so far?

Being crowned Miss Junior Teen Great Britain is going to be pretty hard to beat. It was such an amazing experience and all the other competitors were outstanding so I’m very proud to be the one chosen to represent them.

What’s been the most fun you’ve ever had fundraising?

I love doing charity fashion shows as that’s my passion in life but being asked to judge a cake competition comes in close 2nd!

Which song can you not stop listening at the moment?

I’m an Iggy fan and Team is on constant repeat!

What advice would you give to young women that you wish you had been told growing up?

Don’t worry what other people think, if it makes you happy do it! I know so many boys and girls that hold back because they worry about what everyone else will think.