Lagerfeld showcased his AW17 Chanel collection in the most futuristic way possible. He transformed the Grand Palais into the Centre De Lancement No.5 space station with its own giant Chanel branded rocket, which took a mesmerising blast off at the end of the show.

Models including Kendall Jenner and Bella and Gidi Hadid took to the runway with large beehives in their hair and metallic eye makeup kitted out for a journey to space- Chanel style. As always, the Chanel shows never have a dull audience in the FROW. A-listers from Cara Delevigne, Rita Ora and Pharrel Williams to Lily Rose Depp, Anna Wintour and Lily Allen, each guest arrived in style and received a complimentary Chanel bag on arrival. 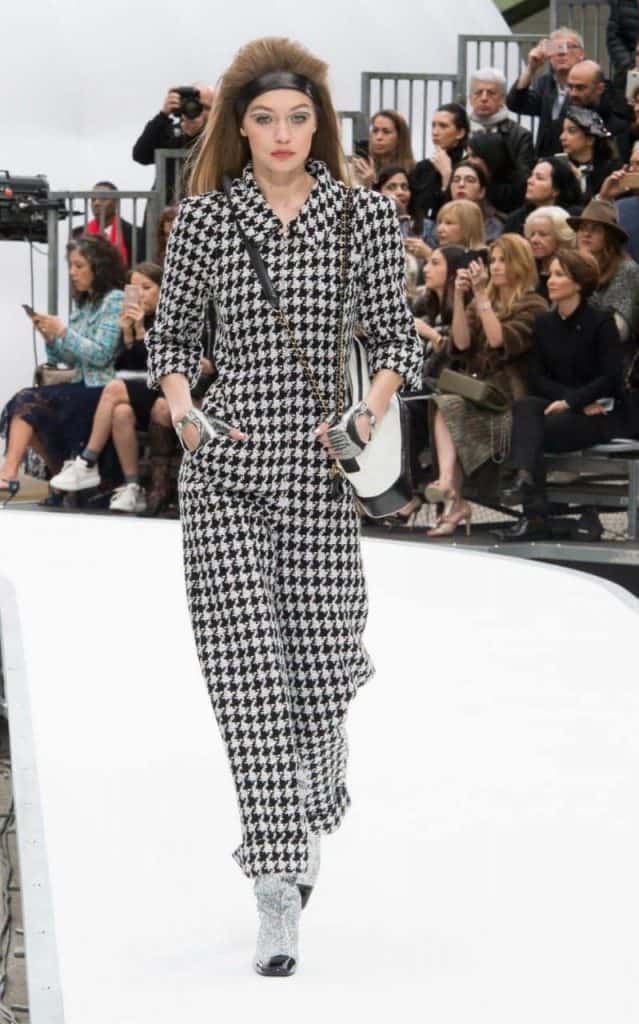 The collection focused on incredible galactic trends, we saw a quirky take on astronaut prints, space shawls and dogtooth coats. Shapes reminiscing space suits looked flattering on the models and of course they were wearing metallic moon style boots, obviously fit for a walk on the moon.

The colour theme of the show was exactly what you would expect if you travelled into space. Metallic silvers complimented shades of green, white, navy and black, all with some form of glitter starry tones added to the looks. 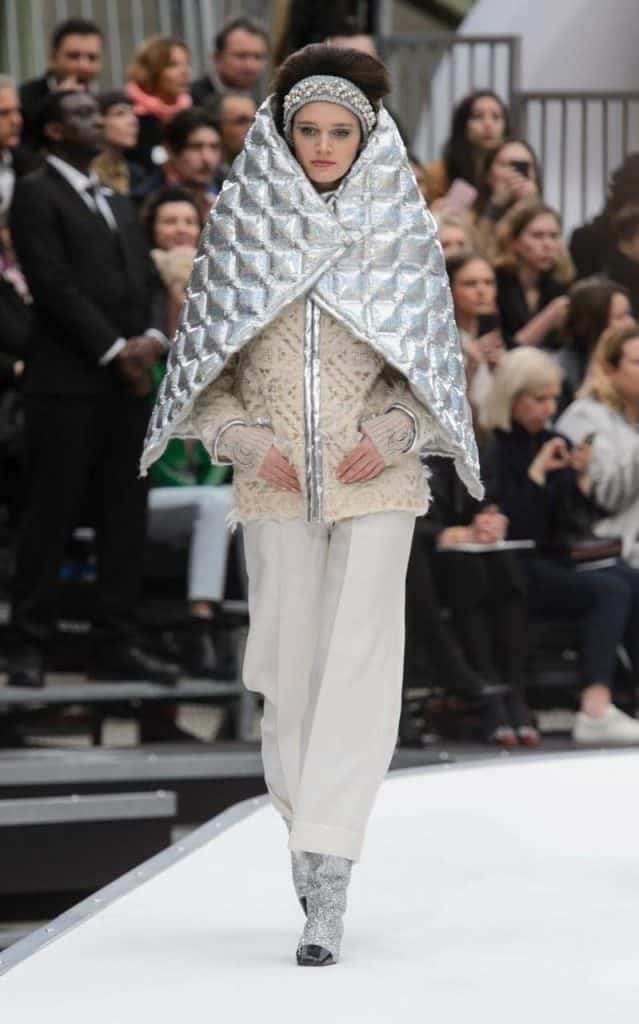 Funnel necklines were key, bringing out the theme of space and skirts were replaced with knee length shorts. Gigi Hadid walked the runway in a flared dogtooth print jumpsuit, similar to a spacesuit, accessorized with metallic fingerless gloves and silver glittered moon boots. Whilst Bella Hadid wore a navy glitter speckled shift dress accessorised with a jewelled brace and headband to match, along with matching moonboots to her sister. 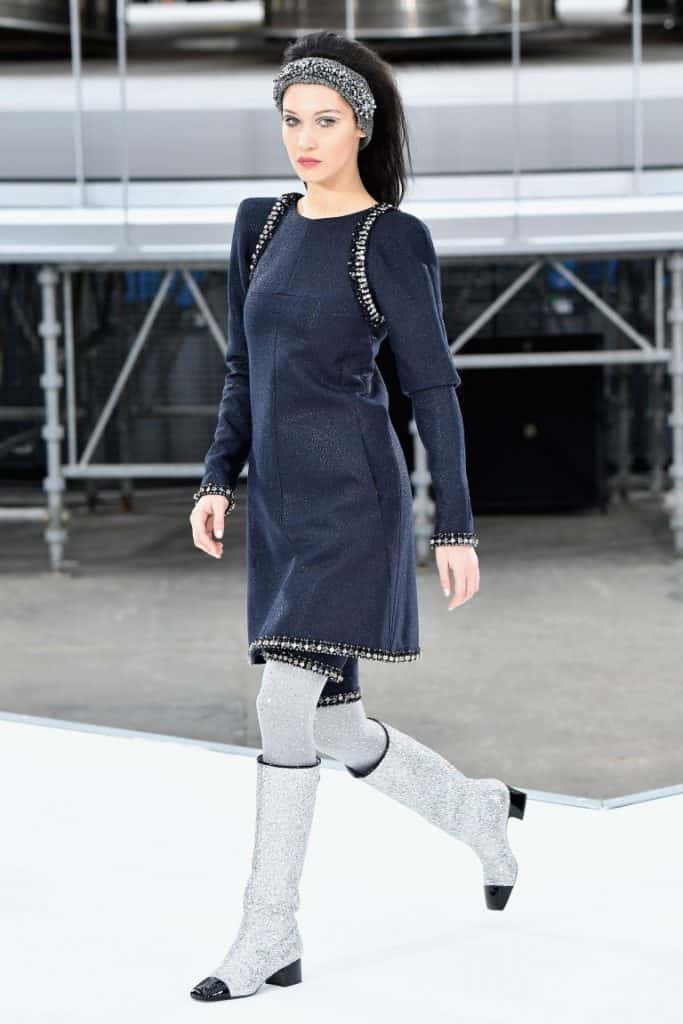 A key look from the show which really enthused the theme was Lindsay Wixson’s silver belted foil coat, with white fur collar and arms. This really exaggerates the theme of space and looks like she’s fit for the moon. Not leaving out how incredible it looks with the silver glitter boots and jewelled headband. 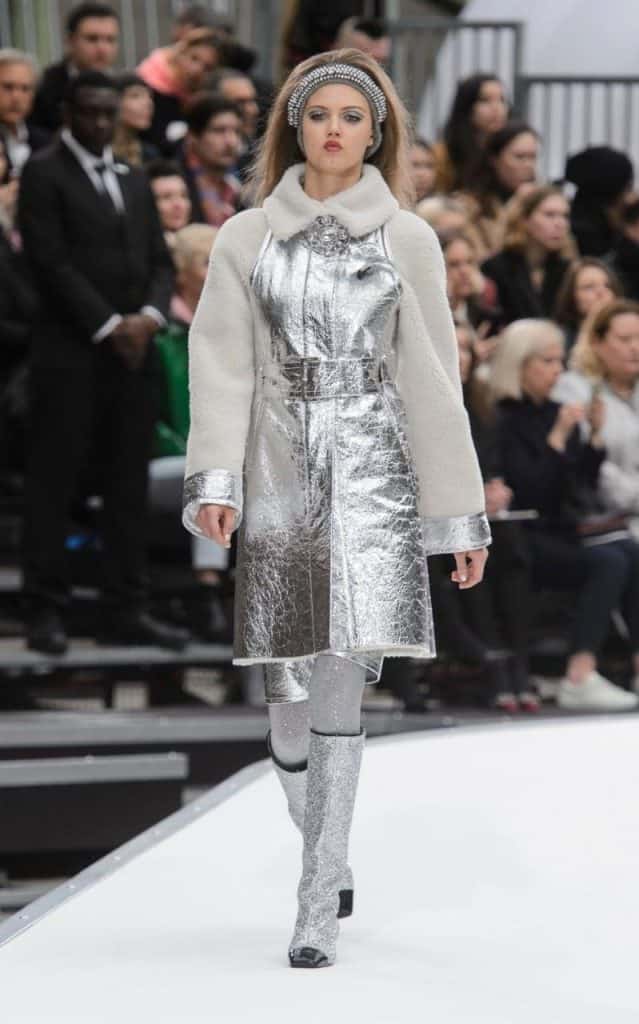 To end the show, Lagerfeld walked out to take his bow with his godson Hudson Kroenig, whilst the rocket began its blast off to the music of Elton John’s “Rocket Man”. Sparks of fire and smoke led the rocket upwards to end the spectacular finale.

Lagerfeld clearly provided the most stylish astronauts known. Let’s hope the next man on the moon is wearing Chanel.