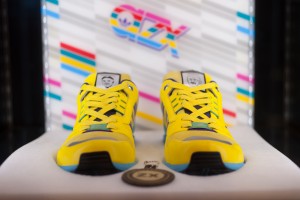 Northern Sole will take place on Saturday September 17, and welcomes all of those who love street style and culture. Headlining the event, which runs from 11am – 3pm, is industrial designer, Alex Taylor, who pioneered the innovative Primeknit Adidas trainer for the London 2012 Olympics; stylist and photographer Erika Bowes, who will share her passion for street style; Gemma Hanley, Head of Footwear Design at Lulu Guinness, and local visual artist Bobzilla. 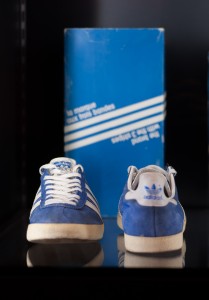 Image Courtesy of The Bowes Museum

The Adidas collections in the exhibition belong to two passionate Northern collectors of the brand, Ross Macwaters and Neil Pestell, who own 2,600 pairs and counting between them. They were delighted to lend some of their iconic footwear to create an exclusive ‘trainer wall’ in the show, following the Museum’s approach to acknowledged authority Stephen Donald, from Potency. The wall is an addition to the exhibition organized by the V&A, and fittingly forms part of the ‘obsession’ theme.

The two collections span more than 50 years of the brand – Neil has a pair of blue ‘Ford Fiesta’ trainers from 1975, made to coincide with the launch of the Ford Fiesta car, which he occasionally wears even though they are the only known surviving pair of the 100 made.

Ross likens his mainly post-2000 collection to ‘laying down good wine,’ usually buying in his size even though 95% of his shoes remain unworn. However, he did splash out £1,600 on a rare pair of ZX 8000 that Adidas made in a single size, UK 8.5, which are much sought after as there are thought to be only 50 in the world.

However, the key moment for the brand came in the mid 1980s when the group Run-DMC began wearing ‘Superstars’ – created as a basketball shoe rather than a fashion item – simply because they liked them. Adidas learned of this and a number of its executives were persuaded to attend a gig at New York’s Madison Square Garden, where the band urged audience members to each take off a trainer and wave it in the air during a performance of their song My Adidas, creating a fusion of lifestyle, music and trainer culture which ultimately resulted in a $1 million endorsement deal for Run-DMC just to represent the brand. A pair of iconic Superstars is on show in the exhibition. 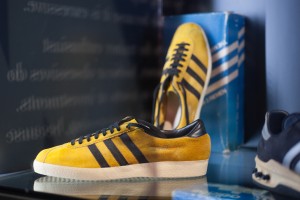 “It was a difficult choice as to what to include on the trainer wall, but we went for diversity – classic models from Europe, Asia and America – with the aim of displaying the best mix of what’s happened in Adidas over the years,” said Stephen, who helped Ross with his choices.

“The Museum has done a fantastic job in the way it’s displayed the trainers,” added Ross. “They sit well with the other exhibits in the show.”

For potential ‘sneaker heads’ young and old, Neil and Ross offered advice on how to begin, with both stressing the importance of buying only what you like rather than chasing what other collectors buy simply to sell on, although they both admitted to ‘spending more than I should’.

The event is free for under 25s who register online at www.thebowesmuseum.org.uk.

Shoes: Pleasure and Pain runs at The Bowes Museum until 9th October 2016.

Will you be attending this event? Tweet us at @Fashion_North!