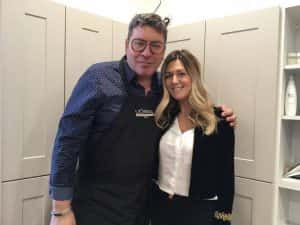 The King of Balayage, Jack Howard, graced Newcastle hair salon, Gallery 108, back in January for a third time to help develop the team’s skills in balayage – the hairstyle everyone’s getting. The Loreal Professional, who also works for Paul Edmonds in Knightsbridge, London and for Sister Lounge when he’s in Abu Dhabi, talks hair trends, celebrity hair dos and why balayage isn’t dead with Sophie Dishman.

Can you give us a quick overview of your career?

I trained in Lincolnshire. I moved to London in the 80s. I then moved to America and worked in DC and New York mainly but was a national artist for Loreal Professional. [I] came back to London in 2010, nobody was doing balayage so it was perfect timing for me.

I’ve been a UK Guest Artist for Loreal Professional for 3-4 years now and last year [I] was made International Guest Artist so I’m working internationally. I’m working in Abu Dhabi every eight weeks until the summer time and I’ll be going off to India later on in the year to do some teaching.

And I have my own hair colour extension brand – I’m busy, I like busy.

What can we expect for this years hair trends?

It’s quite an interesting year because everyone’s looking for the next quick trend. Of course with Instagram and Pinterest one minute you’ve got this, one minute you’ve got that coming out, but I think that what you can see is one of the big trends that we’re forecasting is nude hair, it’s for blondes. It’s a combination of cool and blonde tones working together, very sophisticated and expensive looking which is really nice.

And as far as micro trends go we’re still seeing lots of these sort of wild, crazy, fun colours.  Because of the Pantone colour system – we’re going to see green! But it doesn’t mean to say you have to have it all over green, you can have secretly little placed colours for professional women who just no way could go into the office with that.

Working in Knightsbridge, I’m not seeing all over things but I am seeing people asking for a request of a pastelised pink or a hint of blue, just in a piece somewhere so that they can have a taste of what’s going on without actually fully embracing it.

Anything for darker hair?

Brunettes were our big story last year, a big conversation. So [with] brunettes we’re going to see some metallics going on.

And obviously what we are trying to do with brunettes is to encourage them that they can still have balayage but it can be darker – it doesn’t have to be blonde.

There is a conversation about brunettes, we’re not leaving them behind and brunettes of course they can have those crazy bits of colour if they want to in there and it looks great! 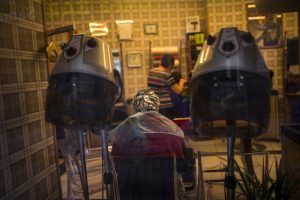 No, balayage isn’t dead. I think foils are on the way out.

I think what’s most important really is it’s about the placement of your colour to complement the hair cut, to work with the skin tone – all of those things.

My focus personally this year is instead of chasing a trend is really making sure that each individual client that comes in has the right colour for her.

And freehand colour is here to stay, it’s part of the mainstream – it’s like end of story!

Which celebrities have you worked with?

I’m quite lucky I work for the official colourist for Next Management so I get to look after quite a lot of people. I look after Gillian Anderson on a regular basis, the supermodel, former Victoria’s Secret model Ana Beatriz Barros, she’s amazing! I actually went to her wedding as a guest which was really nice. Vanessa Kirby is one of my rising stars who is in The Crown at the moment, playing Princess Margaret. The list goes on really… it’s a nice list.

What were the celebrities like that you’ve worked with?

All of those ladies, Poppy Delevingne, Suki Waterhouse, all of them are just really, really nice. Generally, they have to keep their hair pretty much the same all of the time because they’re doing shoots or campaigns. We’re only really changing when it’s a film role and I usually work very closely with the set designer on that. They’re normal people – very easy to work with.

Can you give us some examples of the hairstyles you’ve done?

I made Vanessa [Kirby] a little bit blonder for the SAG’s, I’ve turned her brunette, red, all sorts of colours but we are staying blonde at the moment. Gillian (Anderson) is blonde anyway and we’ve decided that we’re not changing that ’cause it’s too much work. So really all we’re doing is maintaining the look until we decide on something different or unless a director is asking for something different.

What do you like about working as a hairdresser?

For me, I think I’ve been in the industry for such a long time, my career is quite varied so it’s really interesting. Last week I was in Abu Dhabi, next week I’m in Paris. The nicest part for me is that I’m still energised by it and what I really like is when I look at a client and she smiles because she loves what I’ve done – that’s the most important thing. It’s service, I’m in the service sector – I like making people happy, I’m a pleaser.

Are there any challenges as a hairdresser?

I think the biggest challenge we face in this day and age is managing expectation, about what can be done within the time of the visit. So somebody comes in with jet black hair and she wants to be blonde and she’s seen somebody on Instagram with that, that’s not going to happen in one day, no matter how many fabulous tools we’ve got. The integrity of the hair and the condition are the most important and it’s the priority.

What do you think about the North East in general?

I love it! The girls are very glamorous, they’ve totally got their thing down on their hair. They’re not scared by it at all. It’s a very different aesthetic to maybe the South where it’s a little bit more undone, but it’s great. I love coming here!

And finally, what tips would you give to people who want to go into the hairdressing industry?

It doesn’t happen in one day. Young people coming through now seem to think that as soon as they finish their NVQ 2 that that’s it, that they’re going to be on the floor and they’re going to be great. I think that I am still learning  after 35 years in the industry. I’m still going on courses, I still talk to people about colour. It doesn’t happen instantaneously but put your head down, work hard, follow your gut and remember that you always learn from your mistakes not your successes.