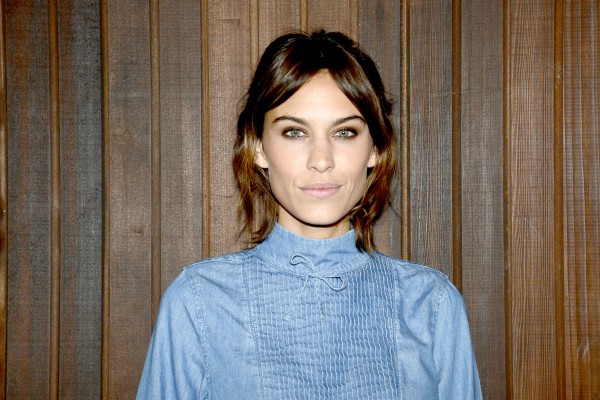 The Queen of peter pan collars, Alexa Chung, 32, is becoming the next collaborator to do a 31 piece collection with the British store, M&S. Anything the woman touches turns to gold, the chain reaction started last spring when Alexa was seen wearing M&S suede A-line skirt which helped the sale before it hit stores and sold out almost instantly.

So, it makes sense that these two would team up to make a collection that would bring in core customers and hopefully attract a younger generation that might of not batted an eyelid to look for clothing in M&S. The 31 piece collection will include a pie crust collar; very victorian, very 2016. There is also signs of a trusty brogue heading our way from recent shots.

It’s a risky move for the multi-chain store as most of their main customer base is over 45; a huge 75% to be precise.

Former Debenhams boss, Belinda Earl, has been brought in as an advisor and has been through a string of clothing bosses in the past few years but has yet to find the right formula to win back shoppers. With the high-street rapidly changing, shops need innovating ideas to move with the times, as Alexa is a well known face it helps with marketing and Alexa’s huge following on social media is where the majority of the younger clientele will come from.

With Alexa’s sense of undoubtable style and M&S rich heritage, it’s no doubt going to be a unique and sought after range.

Alexa said: “I have always had an affection for Marks & Spencer. I am thrilled to be part of this special and unique project,”.

The collection has already created a buzz with fans everywhere, after seeing Alexa collaborate with Topshop, we know how Alexa does not let her fans down.

After all of the excitement of hearing about this collection, you won’t have to wait long to see it in all of its glory, the collection arrives in stores in April, perfect timing for cleansing out your wardrobe and investing in some fresh new pieces.