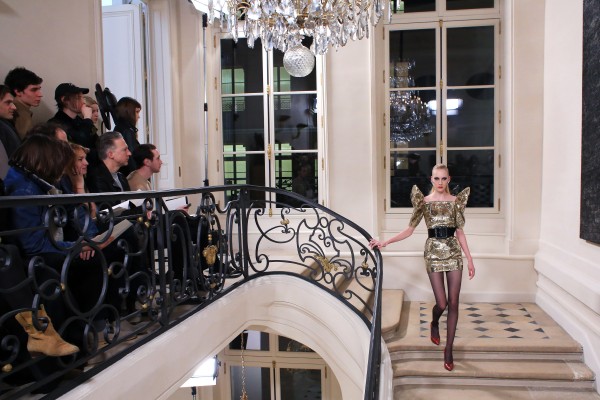 While the monochrome colours, sheer fabrics and rocky undertones that have become standard in Saint Laurent were still prevalent, the grungy-chic look was instead replaced with an air of 80’s glamour.

Madonna-esque padded shoulders, bomber jackets and super cinched in waists formed the main part of the collection, with the odd sequin jumpsuit thrown in for good measure.

The 80’s theme was made even more obvious by the puffball skirts and structured, one-shoulder minis.

The collection showed a fun side to Saint Laurent, whilst still managing to keep an effortlessly cool edge. Simple slicked back hair and red lips ensured the focus lay solely on the clothes.

Never one to conform, Slimane shunned the usual rocky music and dark lighting that he has favoured for the past few seasons. Instead he put on a stripped back, fuss-free show, with no sound apart from a simple narrator announcing the number of each look.

There were only a few lucky editors and front row regulars who managed to snag a seat to the show last night, but those who did had a gold-plated, personalised seat (many of which were taken home as a souvenir afterwards). Taking place in a hotel in the centre of Paris, the marble floors and high ceilings only added to the glamour.

Rumours of an imminent departure have been in overdrive recently, and when approached last night Slimane’s reps responded with a simple ‘I don’t know’. One thing’s for certain though: if this is the Frenchman’s last season with the brand, he certainly went out on a high.